Mỳ Quảng (Quảng Nam­­­-style flat rice noodle) restaurants can be easily found throughout the central province of Quảng Nam. But centuries-old Phú Chiêm Village on the banks of the Thu Bồn River is known as the original home of the traditional spicy meal. Villagers still preserve the process of making noodles by hand and hundreds of local vendors serve the dish in neighbouring provinces and cities.

Mỳ Quảng noodles with chicken at a restaurant in central Việt Nam.  Phú Chiêm Village is known as the original home of the spicy dish, and villagers continue to make noodles by hand for restaurants and street vendors in nearby cities. VNS Photo Công Thành

The dish has gained fame and popularity, and was even served at the Asia-Pacific Economic Co-operation (APEC) Summit in Đà Nẵng and Hội An in 2017.

Nguyễn Tám, 73, spent many years making mỳ Quảng in his family kitchen and supplying ingredients for many of the vendors in Phú Chiêm Village. He is now retired from the trade he had practised since the 1950s, and his daughter-in-law continues the family craft.

Noodle making helps bring in money to support the family, but crucially it also preserves the traditional spirit of the family in the face of rapid urbanisation in the village, where 300 households earn their living selling mỳ Quảng from stalls and producing the noodles in their homes.

“It’s really a tough job,” Tám says. “We saved every penny from selling noodles in the village to cover the cost of living. The noodles were handmade, and it took us all day for preparation including soaking rice in water and grinding the wet rice into liquid powder with a millstone.”

“The final stage of steaming the rice crepes and cutting them into noodles is always done at midnight so they are ready for delivery the next morning to restaurants and the market,” he says. 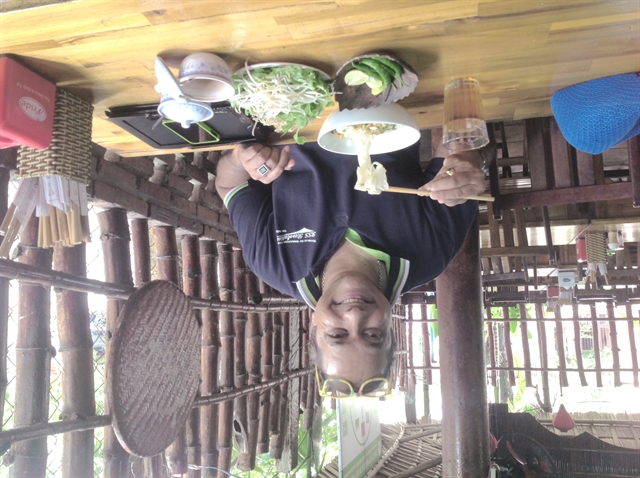 Mỳ Quảng is a popular and cheap snack for food lovers, and it can be eaten in the morning or afternoon.

The ingredients of the mỳ Quảng dish originally included chicken, herbs, grilled rice cakes, roasted peanuts and sliced banana flowers. But chefs can put their own spin on it by offering versions with snake-head fish, beef, frog or egg.

Chi says her noodles are popular because people know the family is one of the few that has preserved its original recipe.

“We still make mỳ Quảng according to our original recipe from the past,” Chi says. “Only the manual stone mortar was replaced by a motorised grinding machine for faster processing.”

She says local connoisseurs prefer the dish for breakfast and during the afternoon work break. Mỳ Quảng stalls are among the most popular daily stops for villagers.

Chi believes the quality of handmade mỳ Quảng comes not only from the purity of the materials but also from the heart and mind of the craftspersons. 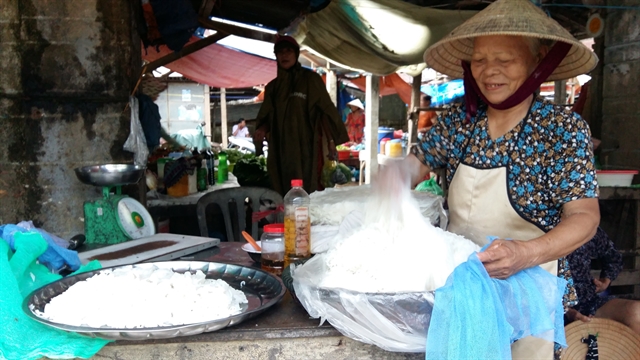 Phùng Thị Đức, 60, was born in the village. She started cooking mỳ Quảng 35 years ago when she married a local man and opened a street vending stall in Đà Nẵng. Over the years her mobile restaurant has moved to almost every corner of downtown Hải Châu District.

She begins preparing the dish each day at 2am in the village before catching the first bus to Đà Nẵng.

“I cook the broth at home to carry it on the bus to serve the first customer around 6am," Đức says. "Not only me, but many women from the village take the bus ride or a bike 30km to Hội An, Tam Kỳ or Đà Nẵng."

“The mỳ Quảng stall helped me gain a stable income and my children were able to grow up on the money," she says. "The snack is quite cheap for most people for breakfast as it costs only VNĐ20,000 per bowl."

Retired noodle chef Tám says people from the village also make cao lầu noodles (another speciality of Quảng Nam) for most of the cao lầu restaurants and street vendors in Hội An.

He says cao lầu and mỳ Quảng noodles are both made of rice, but cao lầu is also rolled from pastry with natural dye and dried with a stove.

Trần Tấn Mân, a chef in Hội An, says mỳ Quảng, cao lầu and cầu mống (barbecue veal) are must-try dishes when visiting Quảng Nam. They can be found at restaurants along the stretch of National Highway 1 that passes through Phú Chiêm Village in the town of Điện Bàn.

Aamir Ahmad Mohamad, a Singaporean businessman, says he has spent a long time living and working in Đà Nẵng and Huế, and mỳ Quảng is still his favourite noodle dish.

“I have been eating it at least twice a week in Đà Nẵng since 2008," says Mohamad. "To me, the dish is awesome and the taste is fantastic, one of the national culinary treasures."

“I decided to visit the place of origin of the mỳ Quảng dish in Quảng Nam Province and the trip was interesting," he says. "The people were very hospitable, friendly and helpful."

“The mỳ Quảng dish consisted of rice noodles and had a lovely combination of very fresh ingredients," he recalls. "The topping consisted of shrimp and chicken; they had other options as well like pork and shrimp. Alongside the noodles I was served toasted sesame rice crackers, aromatic herbs, and lettuce. At the end of my meal I was served green tea."

“Overall, my experience having the famous mỳ Quảng where it originated was truly satisfying. In comparison with other cities, the dish was much more delicious there. The special aromatic flavour and distinctive aftertaste will certainly draw me back to Mỳ Quảng Village in future whenever time permits.

“The mỳ Quảng noodle dish is a national treasure," Mohamad says. "I am sure foreign tourists visiting Việt Nam would love it very much.” – VNS